Working as a daily wage; Today it is owned by a company of 750 crores - ATG News

Home post for Startup/udyog Working as a daily wage; Today it is owned by a company of 750 crores

Working as a daily wage; Today it is owned by a company of 750 crores

working as a daily wage; Today it is owned by a company of 750 crores 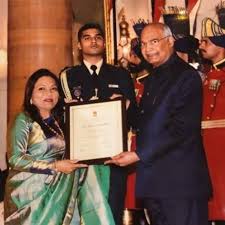 • Some people are born into poor families and spend their entire lives in poverty. But there are some who dream of overcoming poverty and becoming rich. He writes his own destiny by way of difficulty. Even so, they become an inspiration to others.

We have brought to you the story of such a talented woman. This woman was born in a poor Dalit family. She got married at an early age and became a caddy. She had to work two rupees daily to fill her stomach. However, she has set up a company worth Rs 750 crore today with a great deal of hard work. She is the owner of the company. This is the story of Kalmani Saroj, CEO of Armani Tubes.

So, let's know about the success story of the idea of ​​a daily wage of Rs 2 a day at a textile mill.

•  Born in the house of a hawaladar….

Kalpana Saroj was born in 1961 to a Dalit family in Roparkheda in Akola district of Maharashtra. His father was a police officer. Kalpana has two brothers and three sisters. The father reared the children in the face of great difficulties. Kalpana had to go to a government school for education.

When the idea was for 12-year-olds, the father told them to quit teaching. At that time, she was studying in seventh grade. Under social pressure, his father married him at an early age. Kalpana's husband was almost twice her age. But Kalpana's marriage did not last long. They were so disturbed by the church of the father-in-law that they finally had to stay.

Worked for 2 rupees daily in a cloth mill….

Kalpana decided to go to Mumbai with his uncle. Kalpana's uncle lived in a slum settlement in Mumbai. They were selling papads and making a living. Kalpana was working hard. One day, Uncle Kalpana was taken to a textile mill. But, initially, Kalpana refused to work. After much request, he got the job of cutting the rope for 2 rupees daily.

• Kalpana's The life of ideas changed from here on ...

While everything was going well, there was an incident in Kalpana's life. That changed their whole life. His older sister was very ill. She died of no money for treatment. There is nothing worse than poverty. Kalpana resolved to get rich on the same day.

Kalpana got a plot for Rs 1 lakh. But that led to a great controversy. When the dispute was resolved, the plot was priced at Rs 50 lakh. Kalpana partnered with a businessman to construct the plot. Kalpana got 65 per cent of the profit (Rs 4.5 crore).

The "Armature Tubes" company closed in 1985 for some reason. Later, the company resumed, giving the workers rights. But the workers were not ready to run the company. The company started after Kalpana was taken on the board of directors. In 2006, the court made Kalpana the proprietor of 'Artificial Tubes Industries'. Kalpana repaid all its debts to the company in one year. The workers got tired salary. Today, the company is doing business worth Rs 750 crore. Kalpana was awarded the Padma Shri award in 2013.